Syncing is done with App’s integration to Dropbox, needs Dropbox account and should use the same account to sync.

1. How to export(or backup) photos to Dropbox?

Just tap the Album from the App main screen, it will take you to thumbnail photos of the album, tap ‘Share Photos’ at the bottom of the screen. 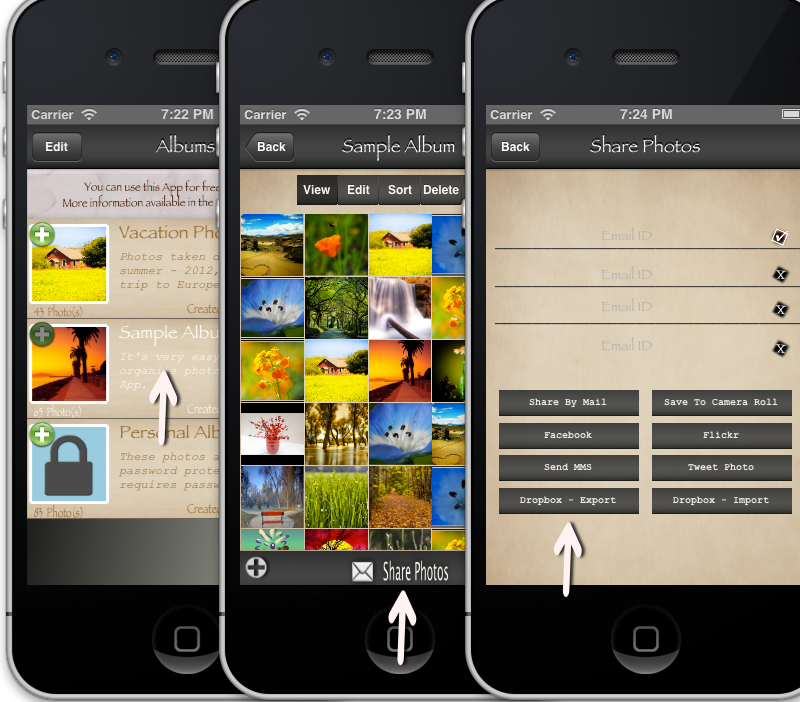 From sharing screen  tap ‘Dropbox – Export’ button, this will launch photos picker, tap ‘Select photos’ and it will multi-select 75 photos at a time, if a photo has already been exported to Dropbox, it will skip that photo and multi-select the remaining photos.

Just tap ‘Export Photos’ from Dropbox screen in the App.During export, Album from the App will be created as folder in Dropbox.

1. How to import folders from Dropbox?

If you want to keep your other device synced with photos exported to Dropbox, go to App Settings screen, and tap ‘Dropbox Folders Sync’, and from Dropbox screen tap ‘Import Folders’, this will create album in the App for each corresponding folder from Dropbox under Apps respective directory. 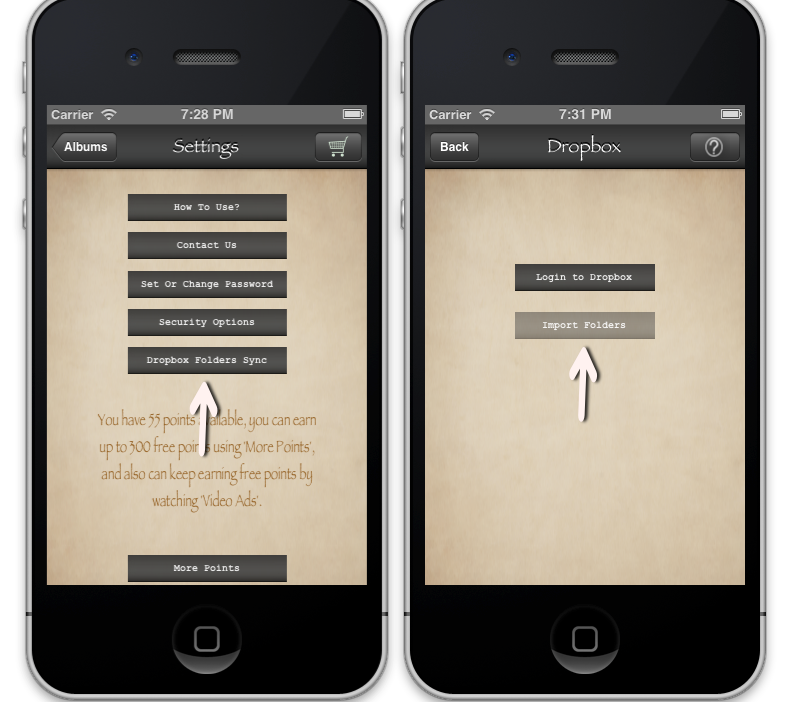 2. How to import(or restore) photos from Dropbox?

Tap the Album from the App main screen, it will take you to thumbnail photos of the album, tap ‘Share Photos’ at the bottom of the screen. From the ‘Share Photos’  screen tap ‘Dropbox- Import’ to import photos.

Before it imports a photo from Dropbox, it will check to see, if it’s already been imported, and will only import if it is not there in that Album, for example, a photo imported from Dropbox but either deleted or move to a different Album in the App, since that photo is not there with in that Album, it will be imported. If the imported photo is present in the Album, it will be skipped in the import process.

Please note all the syncing is within the App’s directory in Dropbox.

***Background process is supported for all the export and import process, after initiating a process you can continue to do something else(outside of the App), while the App completes the process in the background***

What other information is synced?

What about the private albums?

That information(that it’s a private album)  is specific within the device, and is not synced across devices, this is left to the discretion of users. So if you export a private album, it will be imported as non-private album in the other device.

How to sync photos from computer?

You can export photos from computer to any of the sub folders within the App’s respective directory in Dropbox. Now  from the App  in your iDevices you can import photos to the App.

How can I transfer photos exported using free version to paid version?

This site uses Akismet to reduce spam. Learn how your comment data is processed.